We watch TV today differently than ever before – for a start, many of us aren’t watching it on a TV at all. The Handmaid’s Tale recently became the first streamed show to win an Emmy for Outstanding Drama. From Hulu to Netflix, streaming is on the up, and online audiences are taking a more flexible approach to attention. You can be legitimately engrossed in a show at the same time as having several internet tabs open, some likely filled with trivia about the very programme you’re watching. Amazon Video’s X-Ray feature does this intuitively, revealing information about the scene and its cast while you watch. Whilst we might seem less engaged with the content we’re viewing as a result, we’re in fact more engaged with it than ever. The Internet’s place as a social, analytical forum has fostered a participatory viewing culture, in which we can comment, dissect, and theorise over every moment of television. Speculation over a show’s meanings and plot twists has given rise to new, once-removed shows, podcasts and articles discussing the discussion itself. This new way of viewing has galvanised Roland Barthes’ Death of the Author theory in ways he might never have predicted. 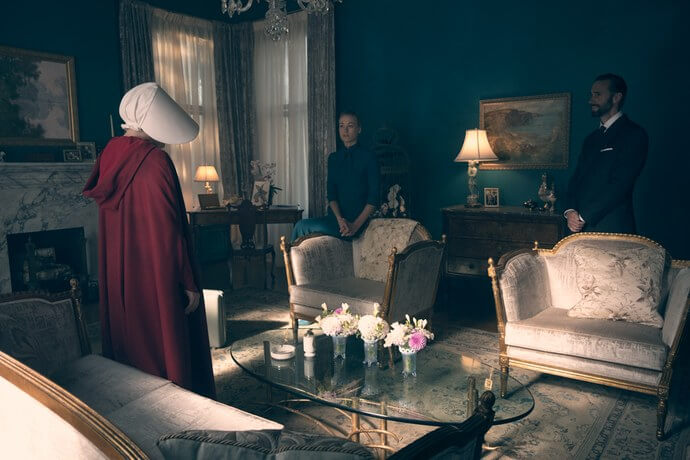 Some of the most timely, culturally relevant television of this and recent years has been derived from literature written decades ago. Whilst The Handmaid’s Tale series strikes as uncannily topical given the political climate in the US, Margaret Atwood’s seminal book was published 1985; Chris Kraus’ novel I Love Dick (1997) has seen a renaissance with Amazon Studios; and then there’s House of Cards, inspired both by the UK TV series (1990) and the original novel by conservative politician Michael Dobbs (1989). Not only have these shows adapted ideas and concepts across mediums; they’ve updated those ideas across time. A closer look at what The Handmaid’s Tale (as produced by Bruce Miller) evolves and interprets from Atwood’s original work tells us a great deal about content consumption, spectacle and spectatorship at the present cultural moment.

These are shifts the makers of The Handmaid’s Tale understand well. Rather than asking us to suspend disbelief for the sake of escapist fiction, the show is self-aware, inviting viewers to play along. TV typically lends itself more readily to social speculation than books. The suspense of staggered episodes keeps us guessing; on top of that, shows are collaborations between makers (rather than a single ‘author’ figure), intertwining numerous ideas waiting to be unearthed by viewers-as-detectives. The creatives behind The Handmaid’s Tale, including Atwood herself, have loaded the show with symbolism. Ane Crabtree, costume designer, has divulged details of hidden meanings in hidden shoelaces. For the set designers’ part, Serena Joy’s art collection hints that the new regime raided the Boston Museum of Art, creating another continuity between Gilead and present-day America. Viewers pay for streamed shows, but it’s more than an economic investment; it’s a cultural one. In Margaret Atwood’s words, “all stories about the future are really about the now.” Future is present, and fiction’s resonance is rooted in contemporary fact. What The Handmaid’s Tale tells us about viewer desire is that entertainment alone isn’t enough; shows should aim to affect the world and reflect it, if in a distorted mirror. Interestingly, Hulu has triumphed with a show that probes the possibility of mainstream media lulling us into surveillance-dominated dystopia when we ‘aren’t watching’. Whereas TV was once about switching off and winding down, the rise of streaming indicates a shift to ‘switched on’ (multi-tasking, theorising, socially connected) digital spectatorship. Hulu’s Emmy Awards triumph lies, in part, in the knowledge The Handmaid’s Tale is told by all of us.