As veganism becomes increasingly mainstream we are seeing a shift in in the cultural understanding of vegan food. Historically, vegetarianism and veganism has been associated with anti-industrialist and anti-capitalist movements, and often linked to a return to nature earth-consciousness, or to overt radical activism (e.g. punk culture). As such, vegan products have for many years relied on cues of breaking down the status quo, through social activism or through a return to pure ‘naturalness.’ However while the recent surge of veganism encompasses many of the same ethical concerns as have always been present in the lifestyle, it is being championed by a generation looking for ways to commit to sustainability without sacrificing enjoyment and optimism in the future. Here in London, this is reflected in a number vegan restaurants who are turning to surrealist imagery and in-restaurant experiences to redefine veganism, branching away from reliably earthy and nostalgic to a more creatively fuelled future-facing experience.

By Chloe, for example, is a plant-based restaurant chain founded in New York and now with several London locations, which aims to serve premium vegan ‘fast food’ that pleases vegans and omnivores alike.  The brand’s current digital comms combines vintage children’s television style model chicks with neon pink, glitter, and a generous helping of 1980s kitsch glamour to envision their new vegan ‘chicken.’ Imagery of sparkles, costume jewellery, dramatic coloured fingernails and models in theatrical makeup draws on tropes of campy drag costuming, connoting the possibilities of playfully creating an identity and breaking free from the status quo. At the same time, the two-dimensional glitter signs and use of chick and car toy dioramas suggests children’s crafts and play, reminding us of the possibilities of youthful fantasy to create our own reality and imagine a different way of living. Here vegan food is presented as a reality-bending fairy tale experience; a new way of eating with which we can gleefully envision an entirely different future while indulging our senses. 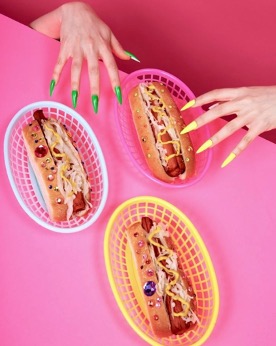 Genesis, another plant-based fast-food restaurant in Shoreditch, likewise suggests their vegan food as a portal into a new world. The name, of course, references the biblical creation of the world, and an ever-present dream of Paradise. The brand directly draws on biblical visual imagery as well; with website illustrations of Adam and Eve with a serpent, as well as imagery drawn from The Creation of Adam in the Sistine Chapel, the brand places itself as a point of awakening moral consciousness and the creation of humanity itself –  a starting point for a new future. More abstractly, Instagram comms juxtapose enticing, indulgent photos of burgers and shawarma with a postmodern colour-blocked frames leading the eye into a colourful fantasy space; food and disembodied hands floating uncannily on dimensionless static neon backgrounds. Such imagery evokes medieval western European religious painting, bringing to mind saints framed in square and arched triptychs, placed in a perspective-less space or on a purely gold background; the space within the frame does not need to represent reality, but offers the figures as leading the viewer ultimately to paradise through worship. At the same time the colour scheme, with large blocks of ombré saturated pinks, greens, and black and white brings to mind early-internet imaginations of the new reality offered by virtual space (one thinks, for example, of the digital world of Tron). The blending of these past and future visions of paradise places vegan eating as a path to a new kind of paradise, re-connecting our relationship to earth, while still embracing modern ways of living.

Finally, in a subtler expression of this trend, Humble Pizza, in Chelsea, has created an immersive, ‘millennial pink’ experience of interior atmosphere, as the warm glow of peachy colour envelops diners in a soft, almost borderless space. The pastel tones, smooth surfaces, and repeated geometric shapes of wall panels and vessels lining the shelves bring to mind visions of retro-futuristic optimism from the mid 20th century and transport diners into physical incarnation of this prophecy. The colour scheme is punctuated by the occasional green plant and Scandinavian mid-century modern-style wood accent. Many of the design elements used here are ubiquitous in Instagram-friendly interiors and contemporary design, but in this context the reference to modernism’s utopian streamlined styles and incorporation of nature within a retro space-ship like space subtly blend to become a message of the type of living we can aspire to, with ethical eating at its centre. And as with Genesis, here retro futurism blends seamlessly with a kind of spiritual awakening. The name “Humble,” for example, subtly references religious and spiritual values, particularly tied to Buddhism and meditation practices in which humility is part of the path forward to enlightenment. And the nearly monochrome rose-toned space, provides a blank canvas of warm positivity in which to meditate on the ethical path offered through the plant-based cuisine. This visual amalgamation of futuristic idealism with a gentle spirituality implies Humble Pizzas vegan redux of a familiar food as ultimately more than a meal, and in fact the path to our emotional and spiritual progress. 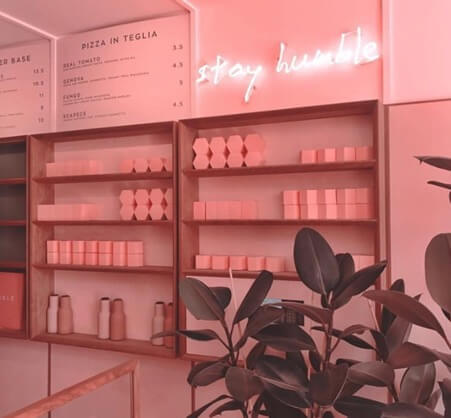 These three eateries have used their own unique visual styles, yet a thread of creatively imagining a new way forward runs through each. Through such colourful visual fantasies, veganism becomes exciting, enticing, and playful; an opportunity to create a completely new vision of a better tomorrow. Rather than looking to return entirely to an idealized past, this new generation of vegan brands is negotiating how consumers can use a vegan lifestyle to find a unique philosophical path, without prescribing an end goal or way of being. Traditional cues of naturalness and sustainability will likely also remain tied to ethical vegan products going forward, and in many cases fit with the values of brands producing vegan products. But the increasing playfulness and surrealism emerging in the category is pointing to new ways for brands to appeal to a broader audience and the next generation of vegan (and omnivorous) consumers. 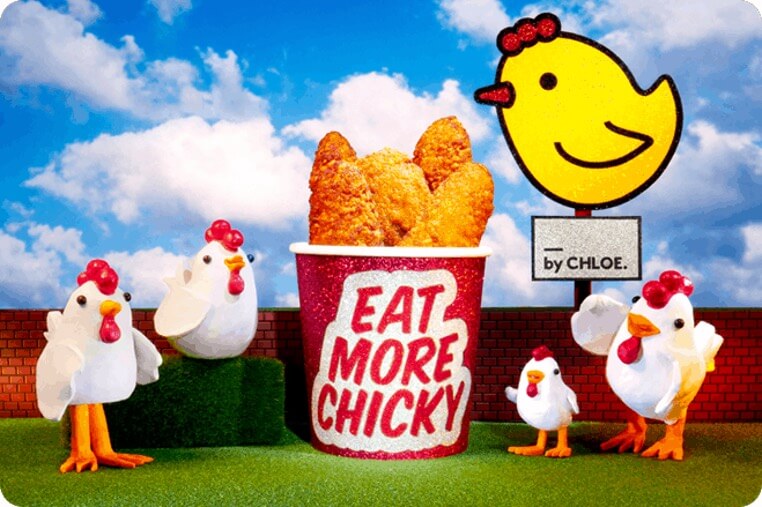