An icon of outdoor wear, the wellington boot has an important place in the British cultural imagination.

The first wellies were most famously and name-sakingly worn in the early 1800s by the 1st Duke of Wellington. The style was adopted by contemporary fashionable gentleman and remained in vogue until the early 1850s, around which time, advances in technology (the advent of vulcanised rubber) led to the first rubber boots being made. Amongst the rubber boot pioneers was the North British Rubber Company – but more on them later. 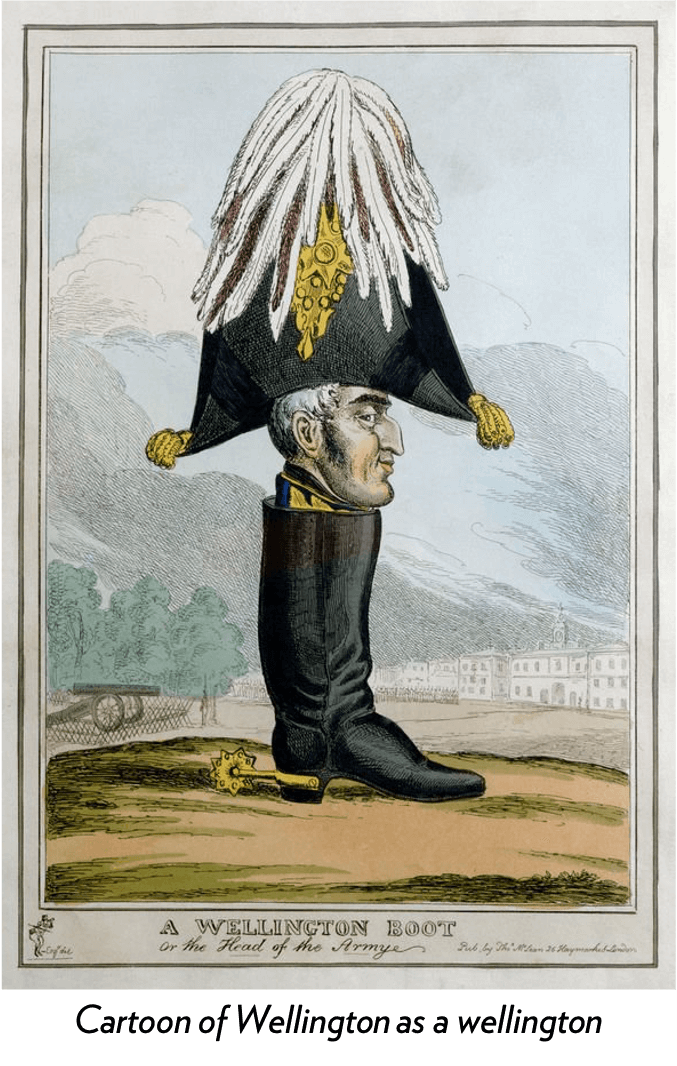 Throughout the first and second world wars, wellies were important for keeping soldiers’ feet dry, and then rose to prominence in peacetime as a practical shoe for industry and leisure. Jump ahead to the present day to see Vogue declaring the wellington boot Autumn 2020’s most practical but controversial shoe, widespread on the season’s runways. Nevertheless, the rubber (or now also PVC) boot remains mainly associated with a range of practical applications, from farming to festivals to rainy city errands – wellies these days are a symbol of both protection and freedom.

The Established Cultural Meaning of Wellies

Firstly, to the abovementioned protection: wellies allow those who work in farming or fishery, for example, to get their jobs done safely and dryly, and as a work shoe, symbolise functional reliability.

Like a fortress for the feet, in the British climate, they are often also worn for leisure in wintry weather (snow, lashing rain) which in itself can engender something of a nesting instinct, and knee-high footwear of sturdy rubber offers cosiness in the feeling of robust shelter. What is more, being comfortable in your wellies often means wearing thick socks, a cosiness staple. 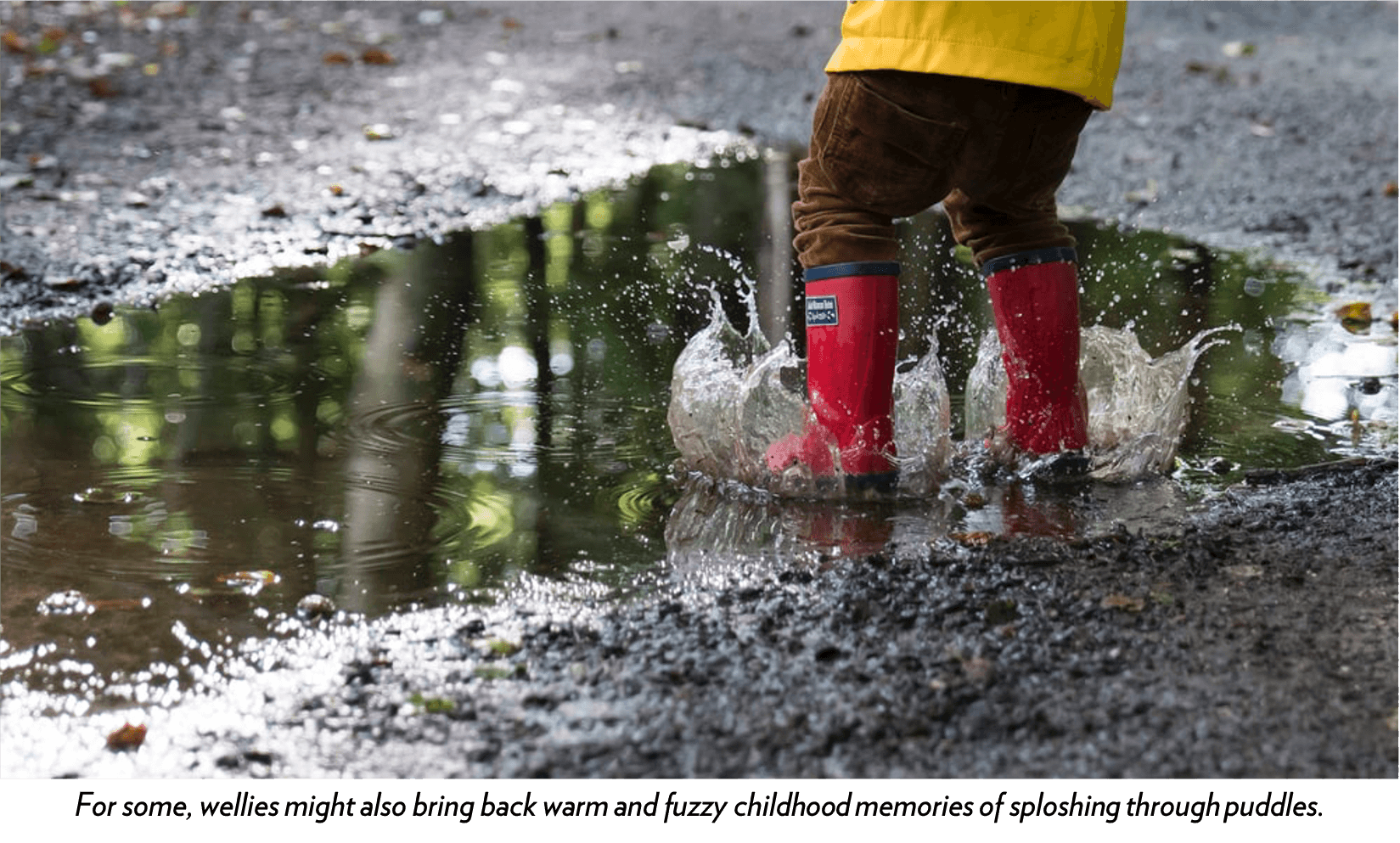 However, it’s not just about cosiness – added to this is the empowerment of wearing shoes that enable you to get through just about anything, terrain-wise. Wellies are flexible and flat; they will allow you to tackle the squelchiest mud or wade through a river, in communion with the wildness of the great outdoors. These shoes have got your back, and therefore offer not only protection from the elements but the freedom that comes with it. 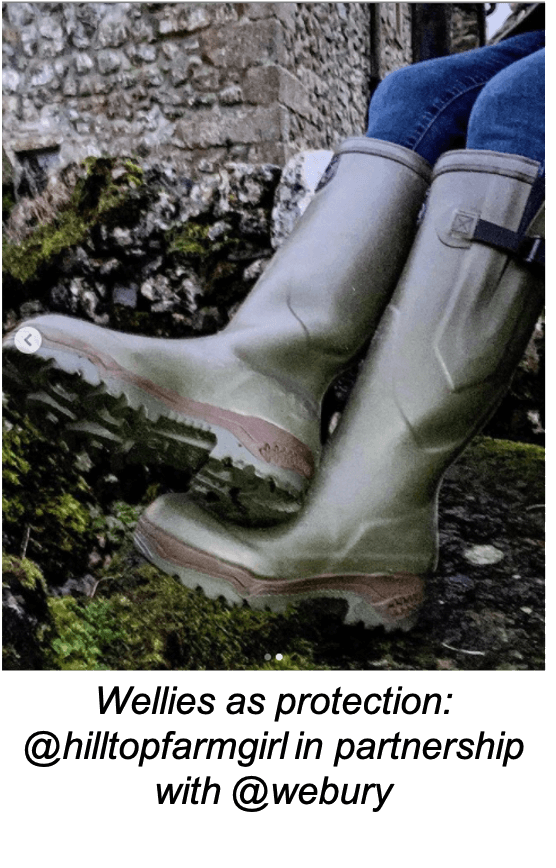 Speaking of mud, there is also the cultural association of wellies with festivals and a more spiritual kind of freedom. Again a practical consideration because of the muddy fields, but as the footwear of choice for a potentially days-long suspension of normal routine in favour of the celebration of music in a way often associated with hippies and hedonism, wellies are symbolic of free-spirited enjoyment as well as rural pursuits.

That cryptic mention of the North British Rubber Company earlier was all leading up to this. Now known as Hunter, this brand is a great example of striking the balance between heritage and innovation to maintain an iconic status. Describing themselves as a “progressive British heritage brand” and their products as “designed for outdoor performance in both rural and urban environments”, Hunter mix tradition with innovation and precision with breadth.

Historically, Hunter is a brand associated with the aspirational duality of town and country – with the privilege of being able to inhabit both of these worlds and transition between them at choice (Hunter wellies just as good for walks in the fields surrounding in one’s country residence as popping out to walk the dog through the streets of Chelsea when in town). The brand name itself alludes to a traditional if now controversial favourite pastime associated with the upper classes, coding of staunch nobility. Princess Diana was photographed wearing a pair of the Original Green Hunter boots which was a big moment for the brand, making the product emblematic and imbuing Hunter with a sense of aristocratic quality. 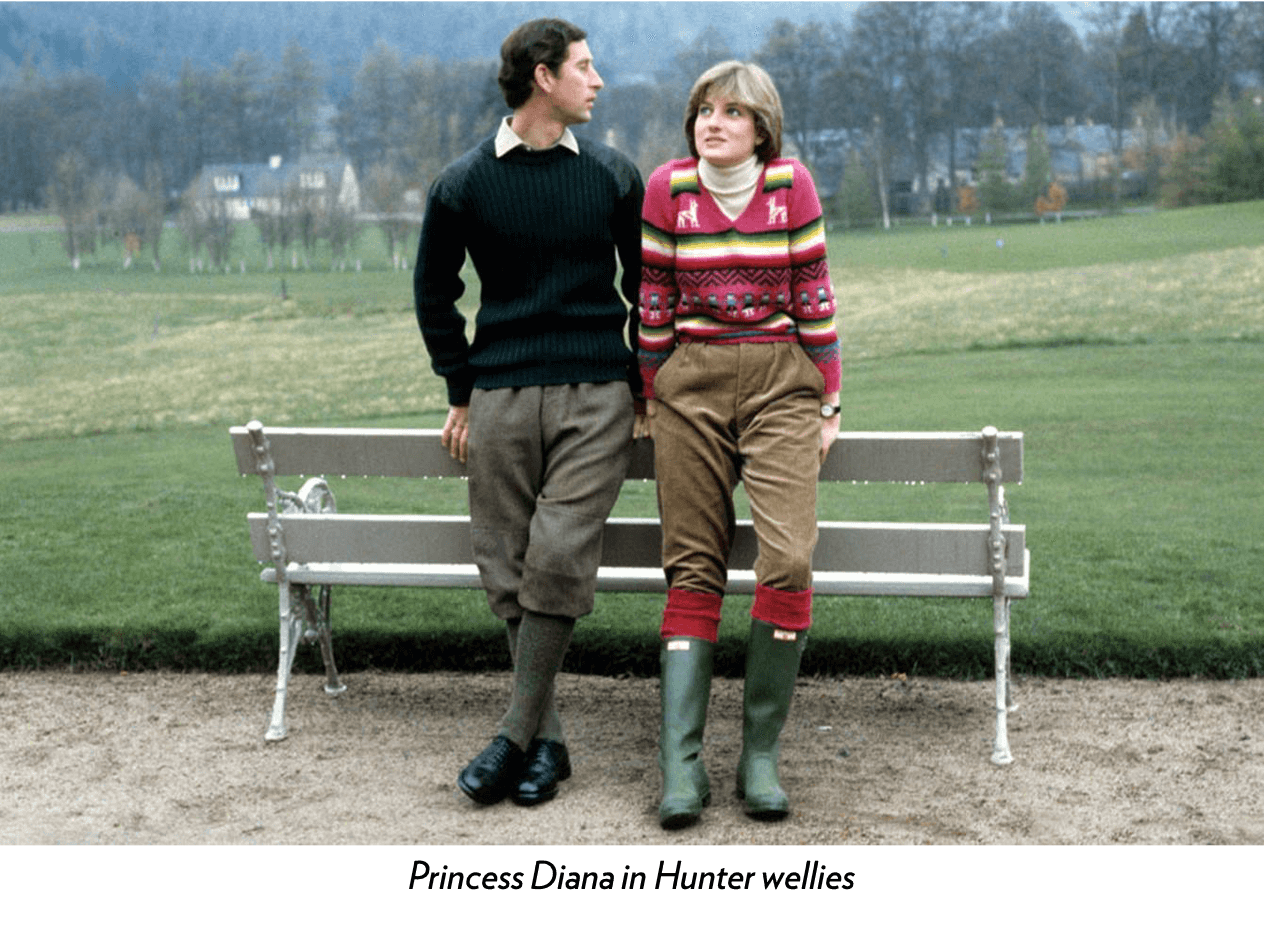 This feeling of aspirational heritage and quality follows through to some of the brand’s present-day offerings. Indeed, the green boots are still available, and the royal family often referred to in connection with the brand (a recent Marie Claire article noted that “Princess Diana’s favourite Hunter wellies are 20% off this Black Friday”). Building on Hunter’s history of technical prowess (one of the pioneers of rubber wellies, remember) and status as a heritage brand, the highly engineered Balmoral boot digs deep into the conceptualisation of wellies as empowered freedom to brave the elements, as well as alluding to aristocratic elegance in both name and price point. Similarly, the Chelsea boot, described on their website as the “all weather city boot”, is of course a well-known shoe style outside of the context of the brand, with a name that alludes to one of London’s most exclusive neighbourhoods and a shape associated with equestrian pursuits – in all, coding Hunter as an aspirational classic that makes the most of modern know-how. 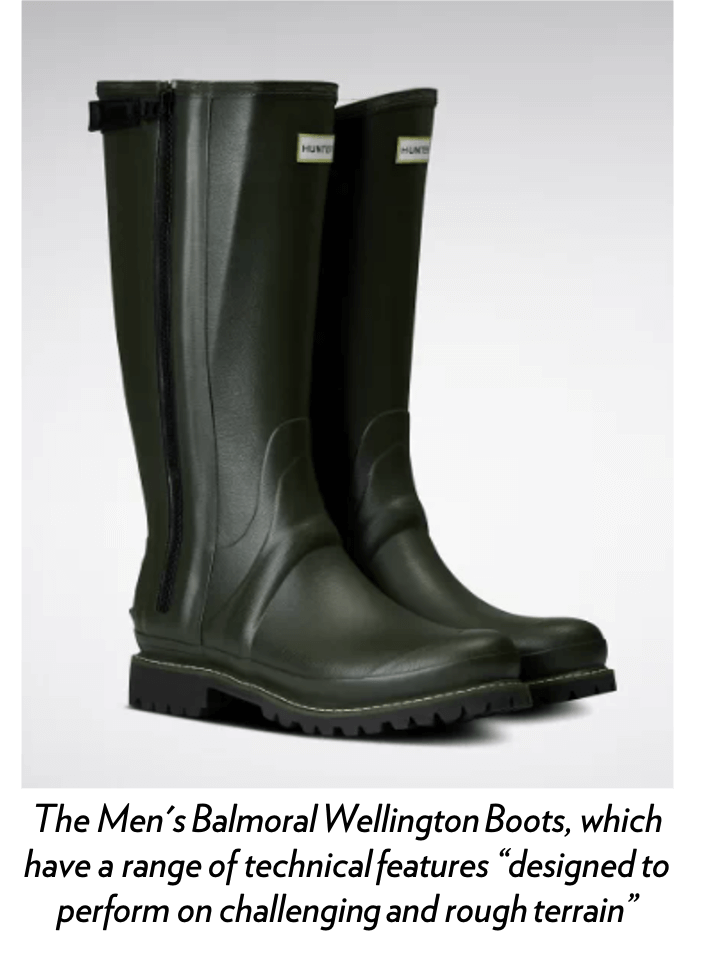 It is important to note, however, that Hunter’s success as a modern icon relies on an ability to keep updating themselves on top of this heritage baseline and aligning with contemporary expressions of their brand values. In 2005, Kate Moss was spotted in a pair of Hunters at Glastonbury, driving an increase in demand, firmly positioning Hunter at the forefront of wellies imagined as festival freedom and, through her status as modelling royalty, also bringing them into the world of fashion. Subsequent collabs (e.g. with Jimmy Choo and YSL) cemented its couture credentials, in dialogue with industry greats – Hunter boots as haute creativity, as well as off-duty festival freedom.

More recently, Hunter seems to have taken a turn for the democratically editorial. The abovementioned Chelsea boots are also now available at & Other Stories, a partnership that adds a layer of high-street accessibility and curated cosmopolitan polish; & Other Stories’ focus on versatility, subtle multiplicity and inspiration from personal style rather than haute couture brings a sense of purposeful yet understated expressivity – Hunter boots as part of a palette of exquisite basics through which personal taste can be expressed. Similarly, Hunter feature a range individuals’ photos online including fashion bloggers, and sometimes their own photography also has a fashion blog feel. Take for instance this styling of the Topstitch Refined Chelsea Boot, and the inclusion of shots of @theindiaedit in a similar product. In Hunter’s own photo, visible pavement and the personal touch of cuffed hems suggest street style magazine features and pristine white jeans and softly shined boots cue careful, considered dressing. Collaboration with an established blogger also adds to the sense of curation as a form of personal expression and the image, with its neutral colour palette, plush textures and mix of classic references with contemporary touches (the relaxed fit, the boots!) connote an effortless metropolitanness. Altogether, this codes Hunter boots as elevated basics ready to be incorporated into a refined, clear sense of self – an image that chimes with current narratives of aspirational style. 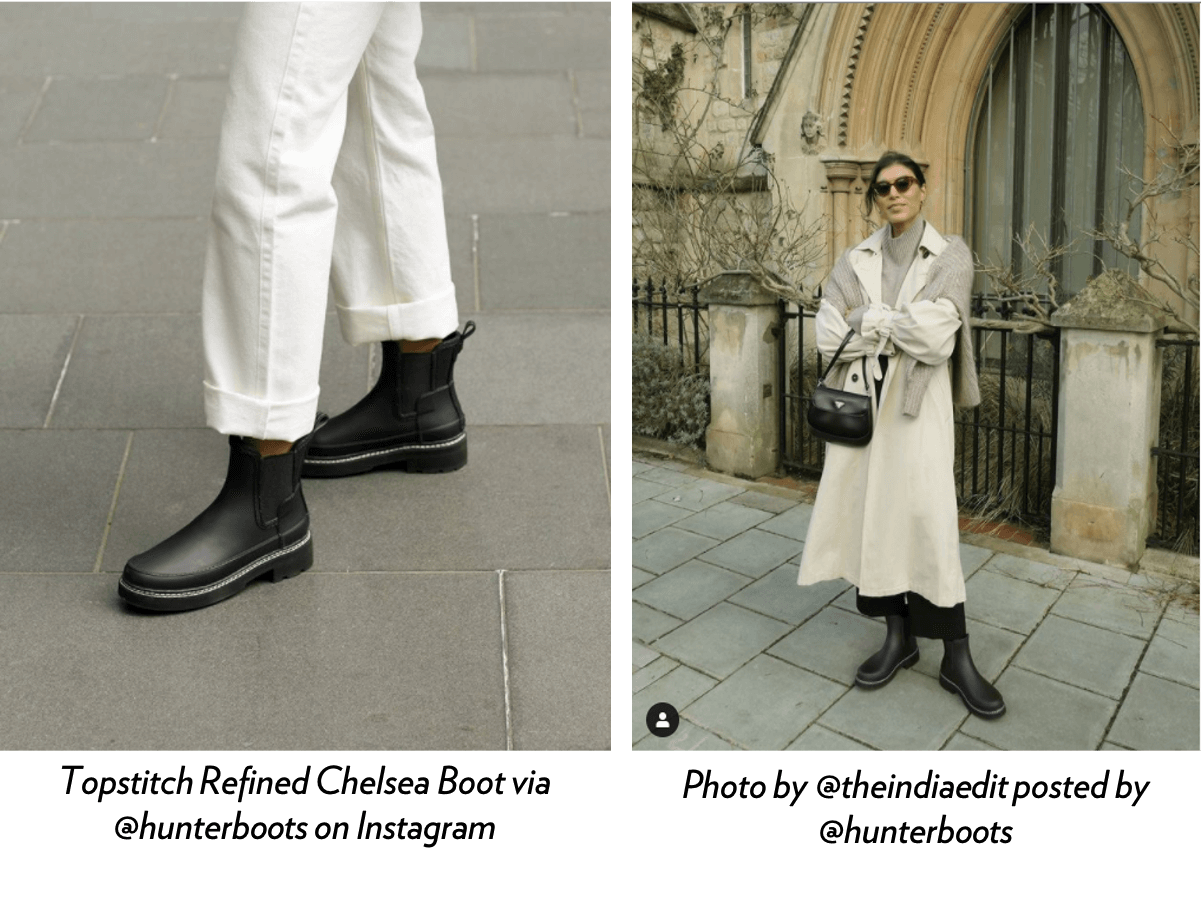 With their current Play collection and #WalkandTalk comms, Hunter also look like they are discovering a playful, arty side – and in part breaking away from what might be perceived as dichotomies of fashionable/practical and urban/natural. The Play collection features colour pop boots and clogs in simplified shapes, suggesting a meeting of easy exuberance (bright colours and blocky look) and deliberate design in their thought-through stylisation (flatform sole, flowing minimal line details). They sometimes appear, like the clogs below, depicted less literally than Hunter’s other products – as part of a composition instead of being worn – suggesting a conceptual yet ludic side. This is, however, still waterproof footwear, and therefore the conceptual side comes with a hint of irony – a play on practicality by alluding to fashion, and therefore blurring the boundary between them (indeed, as pointed out by Vogue – see above). 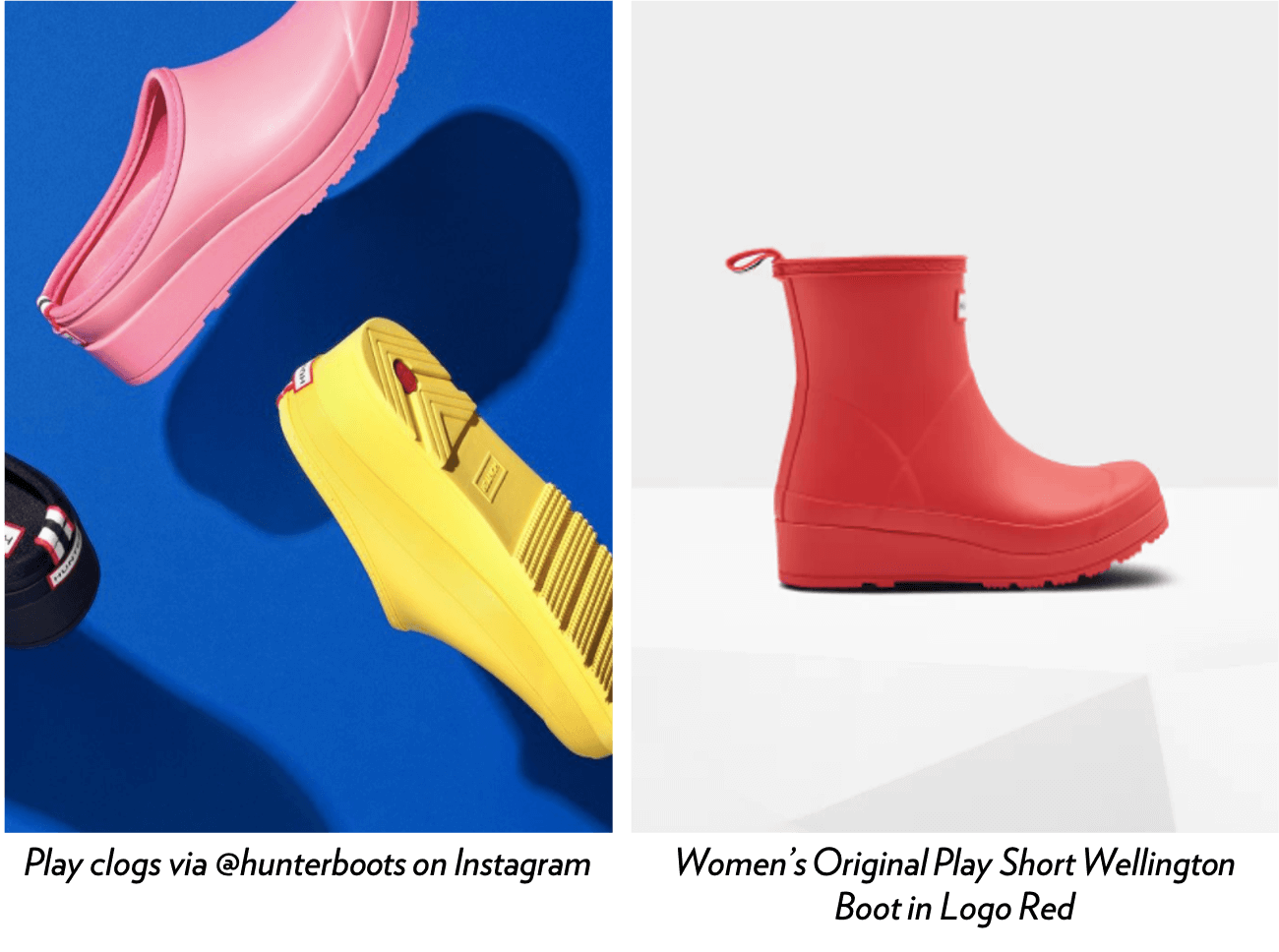 #WalkandTalk, on the other hand, is a bit more serious, and brings art more directly into the picture in that it is a series of interviews with painters, poets, illustrators and other creative professionals. In these IGTV clips, the interviewees speak to camera as they amble along a favourite walking route, answering questions about their life and work, coding Hunter as culturally astute creative facilitator. The walks often involve city parks and streets where the line between negotiation of urban environment and appreciation of nature is blurred. In what context are the wellies being worn? These fuzzy boundaries code the brand as flexible and ubiquitous, ready to play in whatever space is required. 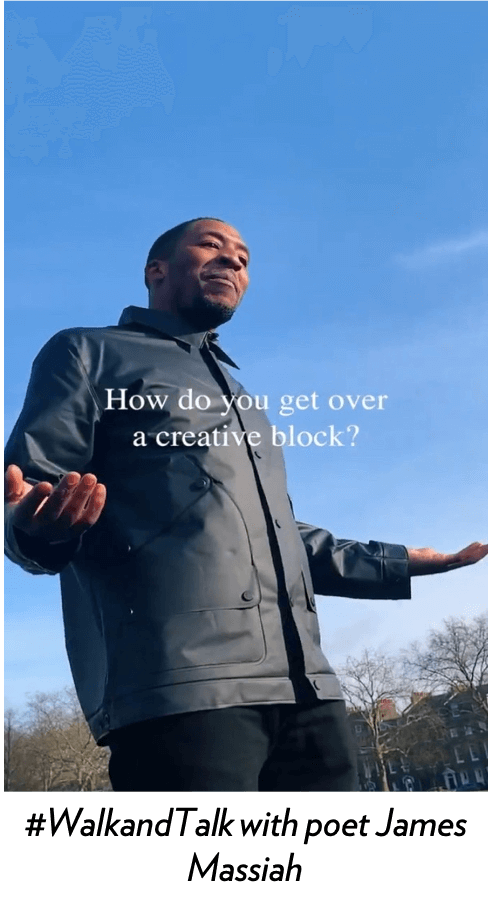 Overall, this mixing of constancy and change, tradition and innovation codes Hunter as both heritage point of reference and contemporary understanding. It is anchored in and then builds upon and plays with the cultural symbolism of wellies themselves, ensuring resonance and clear communication of product benefits as well as continuing relevance by keeping pace with changing culture. In all, this means that Hunter upholds an iconic status by updating themselves while retaining continuity. 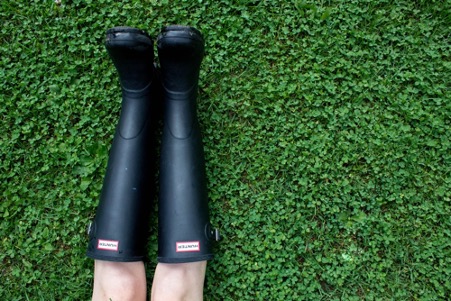